By now almost everyone has seen the following picture of a float of Obama’s Library:

Now, according to the Department of Justice, they are looking into discrimination allegations over the float.  What happened to the First Amendment the democrats and liberals were so fond of touting whenever something like this happened against Bush?

In fact, this pic comes from an Obama campaign rally in Denver in 2008: 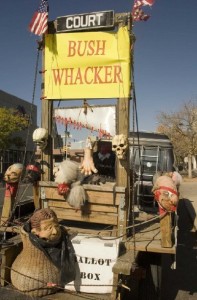 Its complete with then President Bush’s head in the basket.  The left, Obama, DOJ, Holder, Pelosi, Reid or anyone else had no problem, and most would have told you its an exercise of the First Amendment.

So the question remains, why is the left, Obama and the DOJ so thin-skinned when it comes to the same thing directed at Obama.  Do they not realize how two-faced it makes them appear.  Or it is simply the fact that any time anyone dares show a negative opinion of our President, it is disgraceful and racist in the left’s mind.

Of course that all means they have to ignore the very images and signs they used during 8 years under Bush.

If you think suck pictures of threats against Bush were not that common, check out the following like.  Scroll past the text and see picture after picture.

Death Threats Against Bush at Protests Ignored for Years

Just one more thing, I do not support any person, or group, who supports killing the President of the USA.