Earlier this week when Texas Governor Rick Perry asked Obama to come down to the state’s border to see for himself the conditions the reply was no.  Why? Obama replied with this:

So he doesn’t want to make it a photo-op, or some sort of theater.  Yet he ended his visit to Texas for fundraisers with what?  Yep, a photo-op at Franklin Barbeque in Austin, TX. 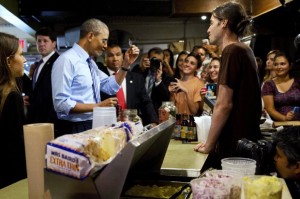 So, he has no problem with photo-ops, its visiting the border to actually see what’s going on that’s his problem.  Of course if he doesn’t want the photo-op, ban all cameras, cell phones, and such while he’s there.  After all, that’s what they been telling the media and other members of Congress when they go to visit.