Over the past week tensions have mounted, rockets flying and airstrikes launched.  In all of this the death toll has risen to over 100 people over a strip of land most of us cannot even imagine how small.  What always gets me is how so many are against the fact Israel has the right, and obligation to defend itself from attack.  The following cartoon demonstrates this attitude extremely well: 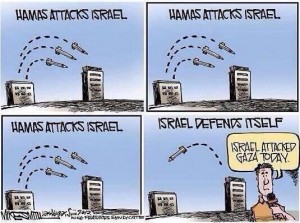 Hamas, and other terrorist groups can attack Israel all day long and barely anything is said, especially from liberals.  However, Israel strikes back, and the loonies come out of the woodwork to denounce Israel.

I have a solution for those over there.  If you don’t want to be attacked by Israel, don’t let groups like hamas poison your people.

Think of it this way, who would you rather have as your neighbor.  The one who builds homes, or the one who throws rocks at your home?  The left appears to want the one who tosses rocks.