A Facebook page, called Death to zionst baby killer Israeli Jews.  It is interesting that such a page is on Facebook still, and even worse that people like it.  No where should people be pushing for someone else to die. 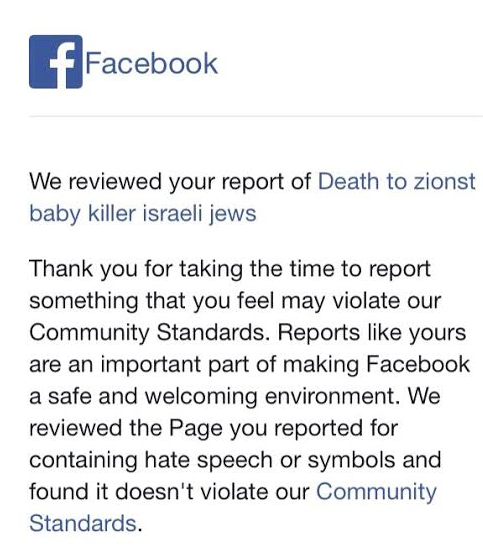 Safety is Facebook’s top priority. We remove content and may escalate to law enforcement when we perceive a genuine risk of physical harm, or a direct threat to public safety. You may not credibly threaten others, or organize acts of real-world violence. Organizations with a record of terrorist or violent criminal activity are not allowed to maintain a presence on our site. We also prohibit promoting, planning or celebrating any of your actions if they have, or could, result in financial harm to others, including theft and vandalism.

Seems to me calling for death to a group of people violates this policy.  Is this a double standard because the group threatened are Jews?  This type of site would not be tolerated if someone called for the death of all hamas supporters it should not be tolerated the other way around.

There are still other death to Israel pages, which Facebook says does not violate their Community Standards.