Posted on August 2, 2014 by ConservativeMe

Over the past couple of weeks and months there has been a lot of comparisons between Putin and Obama.  Which one is the better leader?  Who is controlling who?

Currently Putin is enjoying a much more favorable approval rating than Obama, though that I find is due more to the massive control of Russian media giving great propaganda to Putin compared to the USA.  Aside from that there is a feeling among many in the USA that Obama is showing weakness to a potential enemy.

This weakness is being felt by those in Russia.  This is something a leader does not want his enemy to feel.  On Friday, prime minister Dmitry Rogozin posted a picture on his twitter account of Obama and Putin: 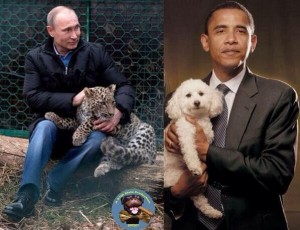 Obama is holding a small poodle, very dangerous indeed, while Putin is shown with a cheetah, one of the fastest land animals and a known hunter.  The translation of the post is “we have different values and allies”.

I guess with everyone else taking shots at Obama, so is Putin.  Is this what Obama meant back in 2012 when he stated “This is my last election. After my election I have more flexibility”.