Hopefully by now everyone has seen the picture of the Animas River turning a sickly yellow/brown color. 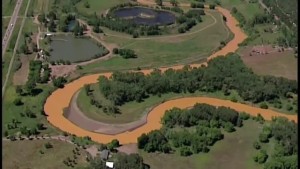 The big question was how were liberals going to handle this, after all government was in control.

That question has been answered, they are shifting blame, and responsibility to the contractors.  The same ones the EPA hired, should have oversaw, and known what the contractor was going to do.

Remember not long ago how the left was coming undone in their blame of Bush over how FEMA handled the aftermath of Katrina.  Nevermind the fact local governments were democrat, or that Bush really had little control over what FEMA did, yet they blamed him anyways.

Now they are doing everything possible to avoid making the government under Obama look bad.

The media took their time to even report the story.  The EPA commissioner reluctantly decided to visit, and liberals are of course making every excuse there is in comment sections of news articles.

News articles are still hard to find, usually buried deep in the matrix of web pages which one has to hunt through to find.  Even the articles written take pains to avoid pointing blame towards the EPA.  Many try to avoid using the government agency at all, instead pointing towards the contractors and then blaming capitalism as the main problem (ignoring the fact the mine in question has been abandoned for almost a century).

Its doubtful liberals will ever gain enough backbone to actually blame the government for anything while a democrat is in the White House.